Inline Hockey is one of the fastest growing sports in the United States!

It is a fast paced co-ed sport that promotes physical activity, teamwork and most importantly fun!

Inline hockey is a non-checking sport played with four skaters and a goalie. It is a high scoring, energetic sport that requires total involvement. 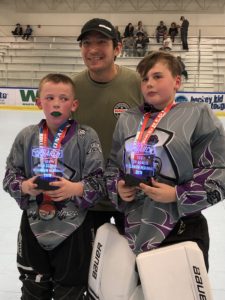 With most youth sports, when participants register, they know the basics – how to run, kick, etc. Inline hockey is unique! Our staff must teach the first time participant not only the basics, but most importantly, how to skate! (this is the equivalent of running in many sports).

Our goal at the Mt. Prospect Park District is to provide the best possible experience for all participants at a reasonable cost. We pride ourselves in providing quality instruction for those first time players. Players are taught the fundamentals and basics of inline hockey including: stick handling, passing, shooting and most importantly skating!

The youth inline hockey leagues are intended for the players to enjoy the sport of inline hockey in a controlled, fun environment, while improving the players’ individual and team skills through practice and games. Emphasis is on players’ skills, sportsmanship and love of the game. Teams are divided fairly by way of player evaluations at the beginning of the session to keep the competition equal. Teams will skate twice per week, an hour long weekday practice as well as a game on Saturdays.

We are confident that once players are introduced to inline hockey in a fun, safe environment, they will be hooked for life!